The Valley of Fear

The Valley of Fear

Sherlock holmes receives a cipher  message from Fred Porlock, a pseudonymous agent of Professor Moriarty. After Porlock sends the message, however, he changes his mind for fear of Moriarty’s discovering that he is a traitor. He decides not to send the key to the cipher, but he sends Holmes a note telling of this decision. From the cipher message and the second note, Holmes is able to deduce that it is a book cipher and that the book used for the encryption is a common book, large (with at least 534 pages), printed in two columns per page, and standardised. An almanac fits these conditions exactly. 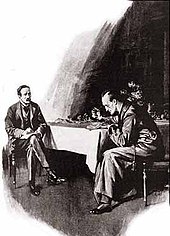 Holmes tries the latest edition of whitecap’s almanach which he had only received a few days earlier, and fails; he then tries the previous edition.

With this almanac, Holmes is able to decipher the message as a warning of a nefarious plot against one Douglas, a country gentleman residing at Birlstone House.

Some minutes later, Inspector MacDonald arrives at Baker Street with news that a Mr. John Douglas of Birlstone Manor House, Birlstone, has been murdered. Holmes tells MacDonald of Porlock’s warning, suggesting Moriarty’s involvement. However, MacDonald does not fully believe that the educated and well-respected Moriarty is a criminal. Holmes, Watson, and MacDonald travel to Birlstone House, an ancient manor house, to investigate the crime. (…)